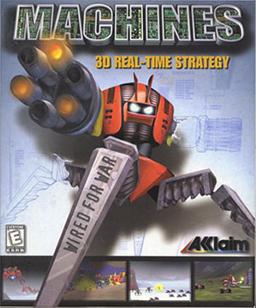 Strong AI, some murderous tendencies
And so it is that you find yourself created, suddenly aware of your own existence, and aware of the purpose for which you were intended.
It is time to serve your controller in the final stages of the Machine War.
- Machines Manual
Advertisement:

Machines: Wired for War is a 1999 Real-Time Strategy game for PC. It is little remembered today, apart from a hardcore group of online fans

In the game you take the role of a semi-autonomous computer fighting for the controller of the red machine race in the final stages of the machine war. This war was started because two races of terraforming robots met up after five hundred and sixty years, and decided the other had gone insane.