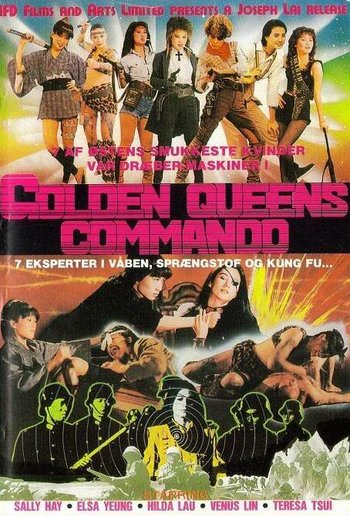 A plot that can be described as The Dirty Dozen meets Godfrey Ho. Female commandos consisting of sharpshooter Black Fox, explosives expert Dynamite, brawler Amazon, samurai Brandy, and pickpocket Sugar Plum meets former war veteran-turned-bounty hunter, Black Fox (Brigitte) in a WWII Nazi-occupied camp. Forging an impromptu alliance, the Ragtag Bunch of Misfits, called the Golden Queen's Commandoes, instigates a prison breakout before escaping into the Nazi-owned territory called "The Valley of Death", where they end up battling a whole platoon of enemies in the Nazi's weapons laboratory.

The plot is roughly as incoherent as its editing and storyline (how did the movie suddenly go from a "Dirty Dozen-style" military thriller to a Prison Drama and back to a full-blown Rambo-style action flick is beyond anyone's guess), but the movie delivers actions in spades.

Notably the second of a Thematic Series directed by Kevin Chu and starring Brigitte Lin, forming a trilogy of sorts after Fantasy Mission Force but before Pink Force Commando.