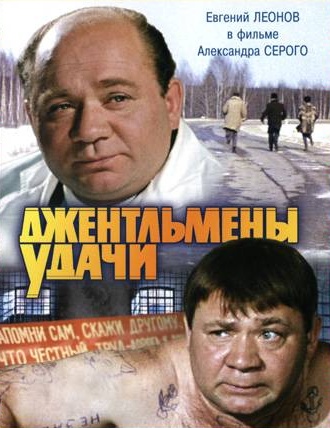 Gentlemen of Fortune is a 1971 film from the Soviet Union directed by Aleksandr Seryj, and written by Georgi Danelia, Viktoriya Tokareva and Seryj.

Archaeologists on a dig discover a priceless treasure: an ancient helmet, five kilograms of solid gold, which once belonged to Alexander the Great. The helmet is promptly stolen by a hardened criminal named Beliy aka "Dotsent" (played by Yevgeny Leonov) and his sidekicks Gavrila ("Sad Sack") and Fedya ("Cross Eyes"). The three crooks are soon arrested, but not before they manage to hide the gold helmet.

Enter Yevgeny Troshkin (also played by Leonov), a mild-mannered principal of a kindergarten, who happens to be a dead ringer for the hardened criminal. The cops persuade Yevgeny to help them in a scheme to retrieve the helmet. Yevgeny will be placed in prison alongside minions Gavrila and Fedya, where he will impersonate Beliy while the real Beliy is sent to jail elsewhere. The authorities will then allow the three to seemingly escape from jail, whereupon Gavrila and Fedya will presumably lead Yevgeny to the helmet. The escape is bungled but the guys do make it out, accidentally picking up a fourth convict named Vasily on the way. However, it turns out that Gavrila and Fedya don't know where their boss hid the helmet. Madcap adventures ensue as the schoolteacher and the two dumb crooks try and find it.