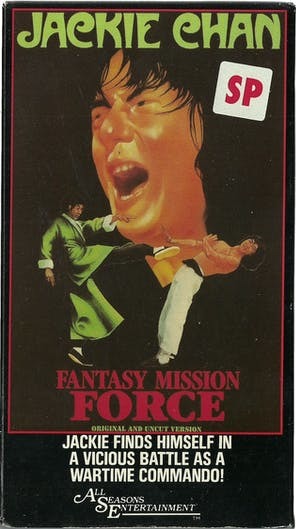 Jackie Chan finds himself in a supporting role where he had roughly 12 minutes of screentime!
Advertisement:

Fantasy Mission Force is a 1983 Genre Mashup military, horror, drama, comedy and parody film (all rolled in one!) directed by Kevin Chu, with an ensemble cast including Brigitte Lin (from The Bride With White Hair and Swordsman), Jimmy Wang Yu (One-Armed Swordsman), and Jackie Chan in a supporting role.

Allegedly set during World War II (apparently in an alternate reality where the war lasts all the way to the 80s, judging by the 70s and 80s pop-culture icons and references that pops out during the film), a covert rescue force is organized to retrieve four Allied Generals (one of whom appears to be Abraham Lincoln) captured by Japanese soldiers. The team consists of two kilt-wearing soldiers, an old hobo named Old Sun, female fatale Lily (Brigitte Lin), her boyfriend Greased Lightning, and are led by General Don Wen (Jimmy Wang-yu). Coming along for the ride is a pair of crooks, Sammy (Jackie Chan) and Emily, who intends to join the mission for their own reasons.

What follows is a ridiculous sequence of events where the team encounters Amazonians, fight cannibals, battle zombies and cultists in a haunted house, and fight an army of rejects from the last Mad Max movie... wait a minute, isn't this movie supposed to be set in World War II?

This movie is notably the first part of a Thematic Series of schlocky, military-themed Genre Mashup screwball action film trilogy, followed by Golden Queens Commando and Pink Force Commando. All three movies notably have the same director and stars Brigitte Lin in a key role.