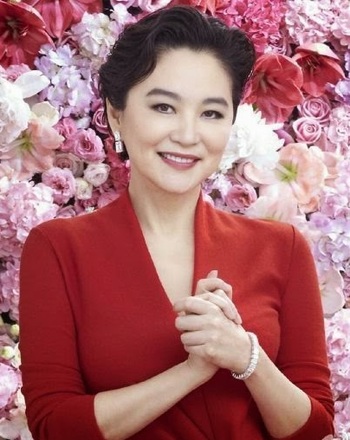 A 60 year old Brigitte Lin on the launch of her second autobiography in 2019.

"During the busiest time of my career, I was shooting six films, playing six different roles. I forgot about playing myself. One day, I stood in front of the mirror, I only saw an estranged face. 'Who am I?' I asked myself. 'What do I like? What do I not like? Why am I unhappy?' I could not answer those questions. And it dawned on me that I had lost myself unknowingly." - quote from Inside and Outside the Window, Brigitte Lin's 2010 autobiography

Brigitte Lin is to 90s Wuxia cinema, much like Cheng Pei-Pei is to the 70s.

Brigitte Lin Ching-hsia (林青霞 Lín Qīngxiá, born 3 November 1954) is a Taiwanese actress well-known for roles in 90s Hong Kong historical period swordplay films, and an icon of East Asian media with a career spanning over 45 years, mostly known for her character "The Invincible" in the Swordsman trilogy and as the sultry arms dealer in Wong Kar-wai's classic, Chungking Express. Regarded as an icon of Hong Kong, China and Taiwan, her extensive roles in drama, gangster, martial arts, war, and multiple different genres have her painted as a "screen goddess", with a career spanning over 100 films and TV series.

At age 16, Lin plays a student volunteer carrying the flag for Chinese soldiers during the Sino-Japanese war; her performance in the film earns her the Best Actress award at the Asia-Pacific Film Festival, and convinced Hong Kong's top directors like Ringo Lam, Tsui Hark, Wong Kar-wai and even Jackie Chan to cast her in movies. Her range of performances and number of movies which are box-office hits revives Taiwanese cinema of the 1970s, and arguably puts Taiwan on the map when it comes to the film-making industry.

Being one of the key components of Hong Kong's "New Wave" cinema in the 80s, Lin was often typecast as cross-dressing roles, notably in Peking Opera Blues and Ashes of Time. With wuxia cinema going through a boom, and already achieving iconic status in the Swordsman trilogy, Brigitte in the 90s would star mostly in wuxia period pieces and martial arts fantasy films, such as The Bride With White Hair, New Dragon Gate Inn, Royal Tramp, Deadful Melody, Ashes of Time and the like.

In 2010, after a career in cinema for nearly 4 decades, Brigitte released her first autobiography, Inside and Outside the Window. The title comes from Brigitte's earlier roles, Outside the Window, where a then 19-year-old Lin started becoming popular and begin to reflect her future in a cinematic career. Incidentally, after her retirement from acting, she became a prolific author of repute.

Tropes relating to the performer: