Film / Fate of a Man 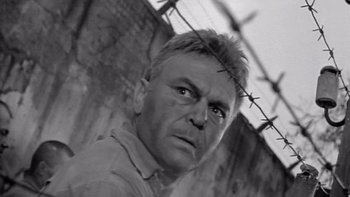 Fate of A Man, also known as Destiny of a Man (original title Sudba Cheloveka) is a 1959 movie by Soviet director Sergei Bondarchuk, based on a short story by Michail Sholokhov. The film shows the fate of the Russian soldier Alexei Sokolov (played by Bondarchuk) in World War II. His happy home life is interrupted by the war, as he has to leave his wife and three children behind. He is assigned to be a truck driver, but during the disastrous retreats of 1941 he is taken prisoner by the Nazis. Now a captive of Nazi Germany, he is forced to work for the enemy all across Germany, while missing his family in Russia. Eventually, he makes a daring escape...

Directorial debut of Bondarchuk, who would go on to be one of Russia's most famous film directors. This movie was criticized by China, since the hero allowed himself to be captured by the enemy in a hopeless situation, rather than dying like a true Communist soldier.