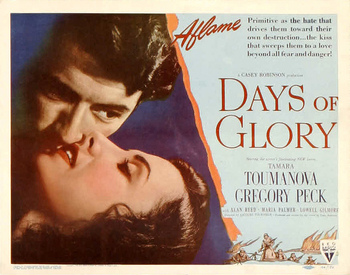 Days of Glory is a 1944 film directed by Jacques Tourneur, starring Gregory Peck and Tamara Toumanova.

Russia, World War II, during the Nazi invasion. The date is never mentioned but judging from references to "the front around Tula" and comments about the Soviets finally striking back, the time seems to be fall 1941, near the end of the German advances that started with the invasion in June. The setting is an isolated bunker behind the German lines that is home to a little squad of guerrilla fighters. The leader is Vladimir (Peck), who was an architect before the war but now is a fearless warrior against the Nazis. Among the others in the bunker are Semyon, a professor; two orphans, 16-year-old Mitya and his little sister Olga; and Yelena, a former factory worker who has become a hardened guerilla warrior.

Into this mix comes Nina (Toumanova), a ballerina who blundered into one of the guerillas by accident when her theater troupe was ambushed and destroyed on the road by Nazis. The presence of a delicate stage dancer among this group of resistance fighters causes some disturbance, especially when Nina and Vladimir fall in love.

This film is one of a handful of pro-Soviet movies made in Hollywood during that narrow window 1941-45 when America and Russia were allies; see also The North Star and the much weirder Mission to Moscow. The film debut of both Peck and Toumanova. Toumanova, a Real Life ballerina, went back to ballet and only dabbled in acting thereafter. Gregory Peck soon became a huge star. Alan Reed, who played Sasha, is better known without the fake Russian accent as the voice of Fred Flintstone on the original The Flintstones.