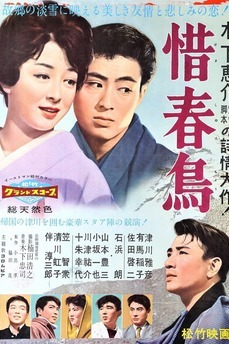 "That's what happens to friendship. It's like a spring cloud. It fades away."
Advertisement:

Farewell to Spring is a 1959 film from Japan directed by Keisuke Kinoshita.

The story revolves around five young men who were school friends. Two of them happen to be visiting their hometown in Aizu after quite some time away. They find that time and pressure have weakened their bonds of friendship. The young men all have various issues and problems:

There's also a subplot with Yasuo's uncle, who at some point in the backstory ran off with Midori, a geisha/prostitute. As the film opens Midori and the uncle are already broken up, Midori back to working as a geisha, the uncle dying of tuberculosis.