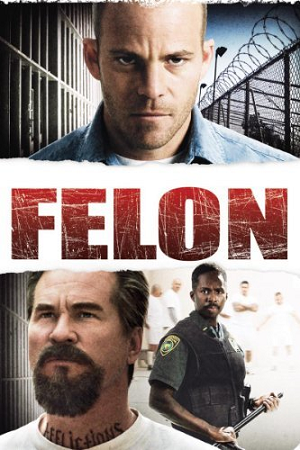 "No rules.
No hope.
No way out."
Advertisement:

Felon is a 2008 drama film about a family man who ends up in state prison after he kills an intruder. Written and directed by Ric Roman Waugh, it stars Stephen Dorff, Val Kilmer, and Harold Perrineau in a story based on events that took place in the 1990s at the notorious California State Prison, Corcoran.

Wade Porter is a loving family man who also owns a business, and is a few months away from marrying his girlfriend, Laura. However, one night a burglar enters his home. Wade pursues the burglar as he follows him out onto the front lawn and subsequently strikes the burglar across the head with a baseball bat, killing him. The district attorney, while sympathetic to Wade's case, is nevertheless compelled by the evidence to reject his claim of self-defense and he pleads guilty to involuntary manslaughter, for which he gets three years in prison. Wade's subsequent incarceration forces him into a world unlike any he had known before: first the crowded confines of the county jail where he's attacked by an irritable wannabe gangster, and then punished with transfer into the high security section of the prison called 'the SHU' (Security Housing Unit) for refusing to inform against some Neo-Nazis he saw commit a murder, which involves twenty three hours a day in a concrete box in shackles, listening to hundreds of barked orders and getting no warning shots for annoyance. The only freedoms left to Wade are in his head and in the yard, but he soon finds out that the yard has been turned into a figurative gladiatorial arena for the inmates of the SHU, where prison politics and violence rule. As he struggles to survive inside, Wade discovers two things—the humanity of his cellmate John Smith and the growing sadism of Lieutenant Bill Jackson.