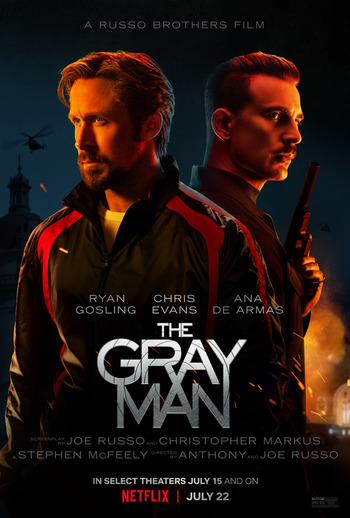 The Gray Man is a spy/action film directed by The Russo Brothers, based on the 2009 novel by Mark Greaney, centered on Court Gentry, the titular "Gray Man": a CIA black ops operative who, after uncovering incriminating secrets about the agency, becomes subject to a manhunt by international assassins led by Lloyd Hansen, a psychopathic former colleague.

The Gray Man was released in theaters on July 15, 2022, a week ahead of its July 22 release on Netflix. A sequel is in development as well as a spin-off.

The Grey Man includes examples of: