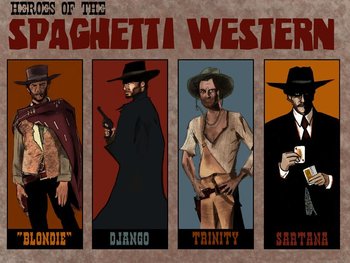 The Man with No Name, Django, Trinity and Sartana are not your good old Wild West Cowboys. And not quite "heroes", actually.
"Perhaps it is the subtly foreign flavor of the spaghetti trilogy, and especially the masterpiece 'The Good, the Bad and the Ugly,' that suggests the films come from a different universe than traditional Westerns. Instead of tame Hollywood extras from central casting, we get locals who must have been hired near the Spanish locations—men who look long-weathered by work and the sun. Consider the legless beggar who uses his arms to propel himself into a saloon, shouting, 'Hand me down a whiskey!'"
— Roger Ebert in his review of The Good, the Bad and the Ugly
Advertisement:

A sub-genre of The Western, so called because they were produced by Italian studios (and tended to feature quite a bit of violence). These movies were typically shot in Spain, since the Tabernas Desert looks similar to Hollywood's idea of the Old West. Since Spanish extras were readily available, Spaghetti Westerns often featured "Mexican" characters and themes, often focusing on The Mexican Revolution, border problems, or Mexican banditos. There was a whole sub-sub-genre dedicated to politically-oriented westerns about the Mexican Revolution called the Zapata Western.

Spaghetti Westerns were originally scorned for their low budgets, fading Hollywood stars, and rougher and harder look at common Western tropes, although in general very few of these Westerns were especially political or informed enough about American history to be actual deconstructions, and few of them ended up critically Vindicated by History outside of Sergio Leone's films. Nonetheless, their greater violence and rougher and harder aesthetic gave spaghetti westerns an integrity entirely at odds with the glossy and stagey Hollywoodian Westerns and, in time, the visual aesthetic of the Spaghetti Westerns later became staples of the genre. Most notably, the Spaghetti Westerns provided the staging grounds for the last great icon of the Western genre: actor/director Clint Eastwood, who was a TV and B-Movie actor in America before his appearance in Sergio Leone's films made him into a major movie star.

Works influenced by the Spaghetti Western include: