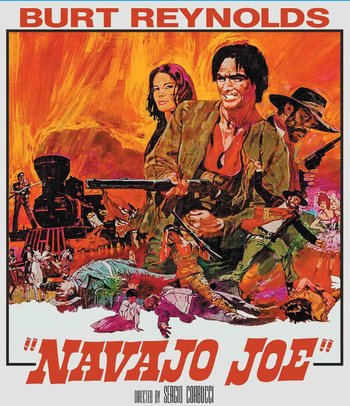 Relentless in his vengeance! Deadly in his violence!
Advertisement:

Navajo Joe is a 1966 Spaghetti Western film directed by Sergio Corbucci (of Django fame) and starring Burt Reynolds as the title character.

An armed gang, led by 'Mervyn' Duncan (Aldo Sambucci), massacres and scalps a native tribe in the West. The Sole Survivor, a Badass Native named Joe (Reynolds}, decides to avenge his fellow tribemates and wife, and begins a series of hit-and-run attacks against Duncan's men. After Duncan and his gang shoot up a tavern, they discover that a train carrying $500,000 in cash is making its way towards the nearby town of Esperanza and decide to rob it with the help of an inside man. Joe learns about this and takes back the train before delivering it to the town himself. After initially refusing to help the defenseless town, he is swayed by a maid named Estella (Nicoletta Machiavelli) and decides to aid the residents in stopping Duncan and his men for good.

The film was produced by Dino de Laurentis, who wanted to make a film that would rival the popularity of the then-recently released A Fistful of Dollars, and cast Reynolds in one of his first starring roles. The film is notable for featuring a soundtrack by Ennio Morricone, who is credited with an alias ("Leo Nichols"). It has been cited by Quentin Tarantino as one of his favorite spaghetti westerns, and parts of the score from the film were later used in the Kill Bill films.

This film features examples of the following tropes: