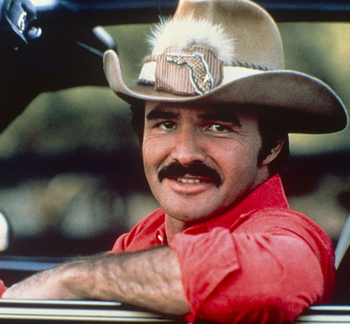 "Burt fucking Reynolds?!"
— The Leader of the Third Street Saints fanboying/fangirling over him, Saints Row: The Third
Advertisement:

Burton Leon "Burt" Reynolds (February 11, 1936 – September 6, 2018) was an American actor, director and producer known for his many television and movie roles.

Born in Lansing, Michigan, Reynolds first came to prominence playing college football for Florida State University before starting his acting career in the late '50s, appearing in B-movies and on television programs, most notably Gunsmoke, where he was a semi-regular as mixed-race blacksmith Quint Asper. He also starred in the short-lived Crime Dramas Dan August and Hawk. He was finally propelled to the A-list with his role as Lewis Medlock in the acclaimed 1972 film Deliverance. His position among the most bankable stars in Hollywood was secured a few years later when he was cast as the leading man in Smokey and the Bandit, which went on to become a trilogy and made him a staple of pop culture. He even tried his hand as a Country Music singer, although that didn't work out.

Reynolds' career took a downward turn in the '80s after a combination of financial troubles, marital troubles, and roles in under-performing films, leading to his taking a break from the big screen and returning to his television roots. A starring role in the hit '90s sitcom Evening Shade earned him an Emmy for Best Actor. He went on to win a Golden Globe for Best Supporting Actor in a Motion Picture and an Oscar nomination in 1997 when he played adult filmmaker mogul Jack Horner in Boogie Nights. He also co-produced the '80s game show Win, Lose or Draw with host Bert Convy, Kline & Friends and Disney, as the show was modeled after game nights he had at his house (the set was even designed like his living room).

Well-known for having a sense of humor about himself, he remained active by returning to comedic television work, such as his voice acting in Robot Chicken, American Dad! and Archer, and voicing an Adam Westing version of himself in Saints Row: The Third. He was also said to have loved Norm Macdonald's portrayal of him as a juvenile, self-amused troll in the "Celebrity Jeopardy" skits on Saturday Night Live. In 2017, he starred in The Last Movie Star in which he played an elderly film star; the production contained a number of Actor Allusion moments, including a glimpse at his Cosmo centerfold.

Reynolds married and divorced twice, with actresses Judy Carne and Loni Anderson. He had high-profile relations with the likes of Dinah Shore and Sally Field.

He was set to star as George Spahn in Quentin Tarantino's Once Upon a Time in Hollywood, but passed away at age 82 from cardiac arrest on September 6, 2018, before his part could be filmed. As fans of All Dogs Go to Heaven put it: "Charlie and Anne-Marie are now re-united in Heaven".