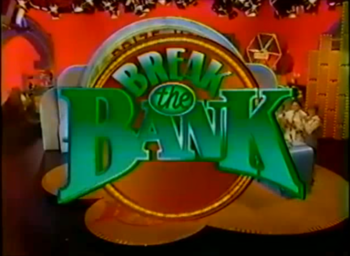 Time is the key that will open this vault door for one of these lucky couples, as they try to... BREAK THE BANK!
Advertisement:

The third of three different Game Shows with this name, from Kline & Friends note a firm composed of former employees of Barry & Enright Productions that left after Jack Barry's passing in 1984; this included Barry's son Jonathan, set designer John C. Mula, composer Hal Hidey, and the namesake of the company, director/producer Richard S. Kline. This was their first game show, and their later productions included Strike It Rich, Win, Lose or Draw, 3rd Degree, the 1990 version of The Joker's Wild, Masters of the Maze, and the 1997 version of Pictionary was syndicated from 1985-86. Married couples played puzzles in this format, competing for time to play an elaborate Bonus Round. In this round, the winning couple participates in various timed stunts; completing a stunt won a punch card which could be used to help "Break the Bank" and win a jackpot of cash and prizes.

It was Gene Rayburn's last series on broadcast TV; Joe Farago replaced him fourteen weeks into the run.