Film / Cop and a Half 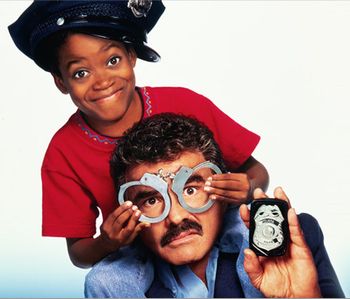 A kid named Devon wants to be a police officer. An actual cop, Detective Nick McKenna, is a Dirty Harry-type of renegade who doesn't play by the rules. Their worlds collide as Devon is witness to a crime and is brought in for questioning, but he refuses to give information unless the cops deputize him, give him a badge and put him on patrol. Since Police Are Useless, Devon is partnered up with well-known Child Hater McKenna and given his dream job.