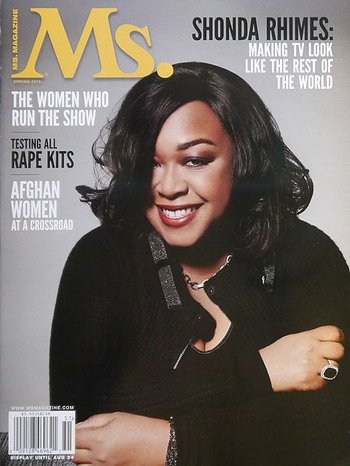 Shonda Rhimes (born January 13, 1970) is an American screenwriter, director and producer. Rhimes is best known as the creator, head writer, and executive producer of the medical drama television series Grey's Anatomy and its spin-off Private Practice. In May 2007, Rhimes was named one of Time magazine's 100 people who help shape the world. Rhimes was an executive producer for the medical drama series Off the Map, and developed the ABC drama series Scandal, which debuted as a mid-season replacement on April 5, 2012. She also served as executive producer for How to Get Away with Murder (though not creator; it was made by Grey's and Scandal writer Peter Nowalk). Her major works are often branded under "Shondaland", a nickname for herself and often her entire Production Posse.

Works that have been made by her:

Works that have been produced by her:

Other works written or co-written by her: