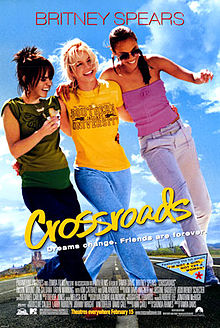 All they have is each other
"This time, we didn't make any wishes for the future. We said goodbye to our past. Now, none of us has any idea where life's gonna take us, 'cause what we have is now. And right now, we have each other..."
Advertisement:

Written by Shonda Rhimes, the film tells the coming of age story of Lucy (Spears) and her childhood best friends Kit (Saldana) and Mimi (Manning) as they take a cross-country road trip, finding themselves and their friendship in the process. The film also stars Dan Aykroyd as Lucy's father, Kim Cattrall as Lucy's mother, and Anson Mount (All the Boys Love Mandy Lane) as Ben.

The script for the film was developed specifically for the singer by herself and her team. Filming began in March 2001, taking place in Spears' home state, Louisiana, as well as Los Angeles, California. Britney wanted "a movie with meaning which didn't talk down to her peers and dealt with real issues" and no one can doubt it deals with real issues, pregnancy, cheating, running away, runaway parents, abusive parents to name a few. It's also subtly written enough that her younger fans around the time could understand it.

Not to be confused with the 1986 Urban Fantasy film of the same name starring Ralph Macchio.

All I need is time, a moment that is mine, so while I'm in between,
I'm not a girl, not yet a woman