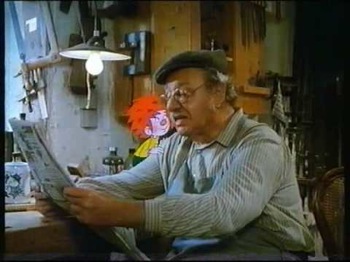 This is the proof that reversing Munich's main church tower clock can actually make it onto the front page.
Advertisement:

Pumuckl is a German children's series, as well as the name of its kobold protagonist. Started as a radio series in 1961, and in the following decades, it got a book series, 33 records (for kids: what people had before CDs), three movies, three TV series, a kids magazine... and even a musical. It's about the kobold [a kind of mischievous brownie] Pumuckl, who lives in Munich in the workshop of Eder, an old joiner.

Some sites on the web about him are at http://www.pumuckl.de

Recurring Characters, besides the protagonist:

The Pumuckl series and franchise provides examples of: