Theatre / Dinner for One 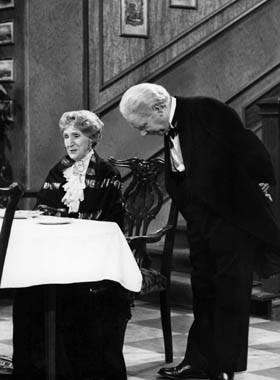 Dinner for One, also known as The 90th Birthday, was a popular British vaudeville sketch that gained world fame after being recorded for German television in 1963, with English dialogue following a brief introduction in German. While they were at it, the same actors also made a version for Swiss television, with only a few modifications.note The German version has survived in a copy of the original videotape - the Swiss version is preserved on a film recording with optical sound, and is therefore of inferior quality.

This short comical play subsequently became the most frequently repeated TV program ever, according to the Guinness Book of Records. The 18-minute black-and-white 1963 TV recording, featuring British comedians Freddie Frinton and May Warden, has become an integral component of the New Year's Eve television schedule of several countries. This has a very great deal to do with the extremely physical nature of the comedy - similar to the international success of Mr. Bean. Ironically, the one country where the sketch remains largely unknown is the United Kingdom. Frinton is almost forgotten in his homeland, although he can be seen in a very brief uncredited cameo on a DVD episode of The Arthur Haynes Show.

The sketch presents the 90th birthday of elderly upper-class Englishwoman Miss Sophie, who hosts a dinner every year for her close friends Mr. Pommeroy, Mr. Winterbottom, Sir Toby and Admiral von Schneider to celebrate the occasion. The problem is that given Miss Sophie's considerable age, she has outlived all of her friends, and so butler James makes his way around the table, impersonating each of the guests in turn. Unfortunately for him, this means participating in each toast of the four-course dinner...

James: "I now declare this bazaar open. And so forth."

Alternative Title(s): Dinner For One