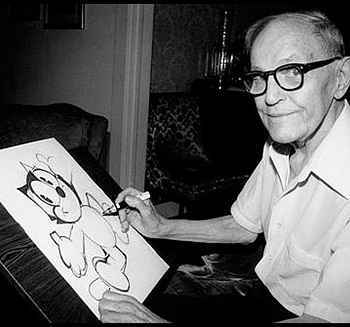 "I think everyone since owes a huge debt to Otto Messmer and Felix. We are using techniques, ideas and cliches today that began with this creation. Felix is truly the father of cartoony cartoons."
—John Kricfalusi, praising Messmer and Felix.
Advertisement:

One of the most influential artists in the History of Animation, Otto James Messmer, born on August 16, 1892 in West Hoboken, New Jersey (now Union City), was an animator and comic artist during The Silent Age of Animation, The Golden Age of Animation and The Dark Age of Animation, and one of the founding fathers of the American cartoon. His most famous creation is Felix the Cat, easily the most influential, and at 99 years and going, longest lasting, animated cartoon character in history, and the first to achieve genuine popularity and success. Messmer's iconic rubberhose art style was also universally copied by the animation community of the time, due to how practical and inexpensive it was to animate.

A biography of him can be found here.

Tropes Related to Him: