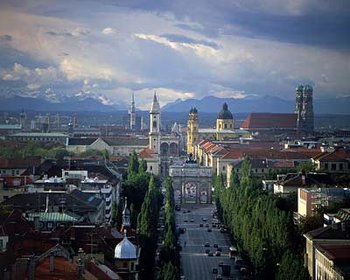 "Pardon me, sir; Which way to that 'Hofbräuhaus' everyone keeps talking about?"
"Amongst the art and beer, Munich is lodged like a village between hills."Translation "Zwischen Kunst und Bier ist München wie ein Dorf zwischen Hügeln hingelagert."
— Heinrich Heine, basically delivering the city's High Concept.
Advertisement:

Munich (München in German, Minga in Old Bavarian), the capital of the Free State of Bavaria, and third-largest, most densely populated and vertically topmost city of Germany, and consistently rated to be one of the world's most livable municipalities

The story of the city started fairly late into the history of Germany, being first mentioned in 1158, when it still was a Benedictine monastery (the chapel house of which actually still stands

as St Peter's Church) with a little settlement (thus the name 'München' - a bastardisation of the old German "Ze den Munichen" - "Where The Monks Are"). There might have been Celts living on that spot for centuries beforehand, but apart from a negligible amount of Roman artefacts, little remains from that era. Munich was built along the banks of the Isar river, at an island-heavy ford that would later prove to be a precious nodal point in the Holy Roman Empire's salt trade - and Munich's key to prosperity.

Over centuries, it served as the capital city for the Electorate of Bavaria (one of the HRE's most influential - and almost consistently largest - territories), later to be made a Kingdom by Napoléon Bonaparte. While it was the salt trade that once made the town big, it was its infatuation with culture and science that made it world-famous. Many Bavarian rulers were patrons of the arts and attracted artists and thinkers from all over the Western World, having them landscape palaces, parks, museums and often entire districts.

Up until the advent of World War I, Munich was known as a huge exporter of its own culture both domestically and internationally. The fact that the cosmopolitan city itself took hints from France, Italy, Austria, Bohemia, Britain and many German states helped Bavaria to manifest itself as a quintessential posterchild for German culture. Plus, Munich always had the honour of essentially becoming a capital right behind the capital for about any larger nation whose sphere of influence Bavaria found itself in - be it Vienna, Paris or Berlin. Prussians loved Bavarian culture, even though the feeling never was mutual.

On a less proud note, Munich grew to become a very reactionary place after the Great War, with much of the citizenry having not gotten over the forceful resignation of the Bavarian monarchy in 1918 and a shortlived Communist revolution (which lasted for a grand total of two weeks, but was bloody enough to kill 3000 people). It was one of the reasons why it would eventually act as the political launching pad for a certain failed Austrian painter and war cripple, being the HQ of what would later become the NSDAP. In 1923, Munich became the scene of yet another failed revolution - Hitler's Beerhall Putsch (which lasted for about a day and killed twenty), but later went on to become the place of his first electoral victories and earn itself the moniker of Hauptstadt der Bewegung ('Capital of the Movement'). The Nazis' first concentration camp was built just outside the city gates in Dachau, and during the 1937 Munich Conference, Hitler achieved the peaceful annexation of the Sudetenland.

During World War II, Munich was heavily bombarded by the American and British air forces, losing 70 percent of its buildings, most of which were medieval and Baroque structures. During that time, the 'Capital of the Movement' also came to birth several notable (though ultimately doomed) resistance movements, amongst them the White Rose

. The city ultimately surrendered to the Americans without a fight.

These losses, however, did nothing to quell Bavaria's popularity and influence. After the war, it became the most affluent region in Germany, and the presence of the US Armed Forces put Bavarian culture back into global focus, affirming Munich's cultural position in the eyes of the world even more so than ever before. It went from being an important German city to the German city for many.

In 1972, Munich hosted the Summer Olympics, which took a tragic turn

Taking a plunge into the Small Reference Pools

It's undeniably true that Munich is very strongly associated with Oktoberfest and Weißbier and Brezn and Lederhosen and Weißwurst and Fußball...

It is also true that the prevalence of those things in Munich's culture is barely exaggerated. Beer had been a vital export of the region, which, just like Munich, has its roots in the Catholic monasteries. The Bavarian Dukes were also the patrons of beer (case in point: the Hofbräuhaus, or 'Royal Brewery House', was in fact a brewery of the Bavarian Crown - and nowadays, the Free State) - not only made sure that beer stayed cheap and popular among the people, but also set purity laws and quality controls that have been adapted by most of the beer-brewing world. The Cloister of Weihenstephan, north of the city, is the world's oldest brewery still in existence, and the international school on the fine art of brewing beer.

The Oktoberfest was, contrary to popular opinion, not meant to be a celebration of Munich's beer heritage (at least, not just that), or even for the month of October, but marks the anniversary of the royal wedding between Prince (later King) Ludwig I and Therese of Saxe-Hildburghausen on October 10th, 1810 on the same green. That said, the festivities were soon moved to September for weather reasons. Having once hosted horse racing and showcases for Bavarian agricultural capacity, it has mostly been replaced by beer tents and joyrides (with the agricultural expo still being held next-door concurrently). The present-day Oktoberfest is, with more than 7 Million visitors attracted in 16 days, by far the world's largest funfair. The actual Bavarian name of Oktoberfest is Wiesn (aka "Meadow", deriving from the place name Theresienwiese).

Weißwurst is revered as the most delicate sausage (delicate in the every sense of the word - it used to spoil mere hours after being made, and it still cannot be thrown cold water and boiled it into submission like 'hardier' sausages) in the region, and the original Munich variation still knows few worthy substitutes.

What's more, BMW stands for Bavarian Motor Works, and is headquartered near the Olympic Park.