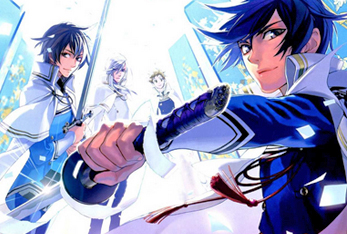 Di[e]ce is a manga written and illustrated by Saki Otoh and Kana Yamamoto that ran from September 2007 to November 2010. It was serialized in the shoujo magazine Monthly Comic Zero Sum. The main characters are Childhood Friends Kazuki and Haruki, who are not related but look exactly alike, and have the same birthday. It turns out their destinies are entwined - in a really unpleasant way. They're both players in death games modeled after chess called di[e]ce. Every player is a chess piece on the white side or the black side, and the objective is for the players to get out of various dangerous situations alive, before the time limit is up. This usually involves slaughtering a lot of zombies. Oh, and the games will only end when one of the kings is killed - and the kings can only be killed by each-other. The kings, of course, are Kazuki and Haruki.

While never officially licensed, the series was finally complete scanslated into English. It's almost unheard of, which is puzzling, considering that it has things fangirls typically go for: namely lots of pretty boys with sad backstories, and an impressive amount of Ho Yay.