Manga / The Devil Does Exist 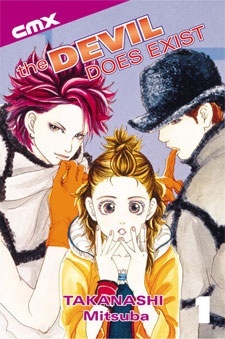 "Anything I desire, I will acquire."
—Takeru Edogawa
Advertisement:

The Devil Does Exist (Akuma de Sourou) is a shoujo romance manga series by Mitsuba Takanashi, which ran in Bessatsu Margaret from 1999 to 2002. It was later adapted into a live-action Taiwanese drama, Devil Beside You (starring Rainie Yang and Mike He).

It follows shy high schooler Kayano Saitou's failed love confession to a classmate, which gains the attention of the principal's mischievous son, Takeru Edogawa. She resists his bullying, but discovers that her mother is engaged to Takeru's father! Even harder than living together is working out their complicated relationship.