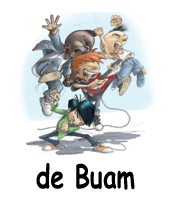 Mingamanga is a German... No, just to specify this, Bavarian comic written by Robert Platzgummer. It's about four boys living in Munich, occasionally fighting, but ultimately sticking together and having fun. Some of their adventures were published in the comic magazine Comicaze