Animation / The Rabbit with the Checkered Ears 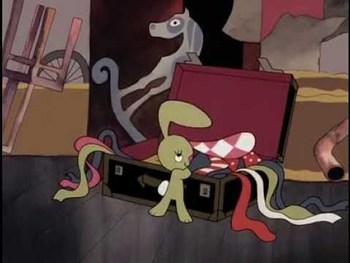 The Rabbit With the Checkered Ears (Hungarian: A Kockásfülű nyúl) was a series of 26 animated shorts (two series of 13 shorts each) produced in 1974 and 1976 in Hungary. The series was produced by graphic artist Veronika Marék and animator Zsolt Richly through Hungarian animation studio Pannonia Film. A third season by Popfilm was planned for 2018, reimagining the characters in a modern setting with a Line Boil animation style, but it was cancelled after one episode due to creative disagreements.

The title character was a mossy-colored toy rabbit who lived inside a trunk in the attic of a skyscraper overlooking a busy overpass. Each short would open up with the rabbit waking up, stepping outside and using a telescope to spy out adventure. In addition to the bunny, four children co-starred in the shorts: Kriszta, a dark-haired girl; Menyus, a red-haired boy; Kistöfi, a very young blond boy, and Mozdony, a big kid who walked the line between The Big Guy and The Bully. The bunny would spot the children involved in some kind of activity or getting into a dilemma, leading the bunny to fly over to help out.

While The Rabbit with the Checkered Ears was wildly popular in Hungary, it became even more popular abroad. Because no dialogue was involved, it required no dubbing and was easy to export. In the USA it aired as a segment on the Nickelodeon TV show Pinwheel. Many American fans called the cartoon "The Bunny In the Suitcase" (see Title Confusion below).

The Rabbit With the Checkered Ears contains the following tropes: