Film / A Crime in Paradise 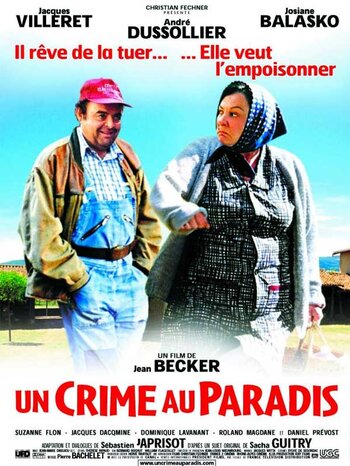 He dreams of killing her. She wants to poison him.
Advertisement:

The story takes place in 1980, in Saint-Julien-sur-Bibost, a French village in the Lyon area. Joseph "Jojo" Braconnier is an unhappy farmer who's married to Lucienne aka "Lulu", a nagging shrew and alcoholic who torments him everyday with nasty pranks and insults. Their farm is called "Le Paradis" ("The Paradise"), but life there is anything but, and Jojo cannot ask for divorce since the farm technically belongs to Lulu, who inherited it from her family. One day, Jojo hears of a brilliant lawyer who has just achieved his twenty-fifth acquittal. Very impressed, Jojo seeks the lawyer out and tells him he killed his wife, then listens to the lawyer's advices in order to prepare the true murder. Meanwhile, Lulu also sets out to murder Jojo.

A Crime in Paradise provides examples of the following tropes: