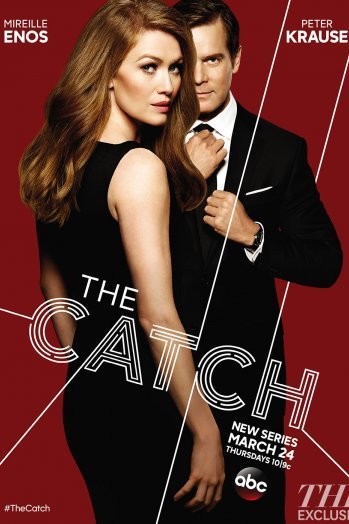 The Catch. Ready to fight.
Advertisement:

The Catch is an American crime drama show airing on ABC, created by Kate Atkinson (Case Histories), Jennifer Schuur (Hannibal, Big Love, Hellcats), and Helen Gregory, developed by Allan Heinberg (Young Avengers, Sex and the City, Gilmore Girls, Grey's Anatomy, Scandal...), and executive produced by Shonda Rhimes (Grey's Anatomy, Private Practice, Scandal, How to Get Away with Murder, etc.). Best described as a heist-Mystery Fiction, the show mainly focuses on two factions: a team of Private Investigators, and a team of Con Artists.

The end of the first episode reveals that one of the lead PIs was romantically linked with one of the con artists, which complicates things.

It has also been very popular, to the extent people wanted to know more about the show. In spite of this it was cancelled after its second season in 2017.

Tropes applicable to the show include: