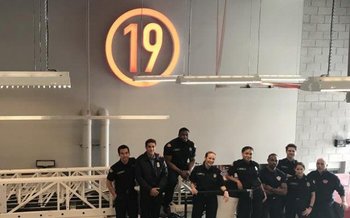 "Every life saved, every fire put out, I do this job because I love it."
— Andy Herrera
Advertisement:

The second complete spin-off of Grey's Anatomy, this time focusing on Seattle's best and unluckiest firefighters instead of doctors. It features a diverse cast of characters, perhaps moreso than Grey's and Private Practice because it was made over ten years later. The showrunners have said that their main cast will comprise people of many backgrounds and sexualities.

Ben Warren, in his latest change of career, has decided to become a firefighter after experiencing the adrenaline rush of a fire breaking out at Grey Sloan Memorial hospital, where he was a surgical resident. He quit his job without telling his wife, the no-nonsense Chief of Surgery. During his rookie experience being on watch at Station 19, he and mentor Andrea "Andy" Herrera attend to a pair of brothers in a house fire and rush them to Grey Sloan, their friends 3 blocks down midtown Seattle. Herrera strikes up a quick friendship with Meredith Grey while charming the staff and taking no nonsense, either. The danger of Seattle medicine mixes with literal fire, and the already danger-prone Ben Warren is up for some challenges. Herrera's father is the Old Retainer of the station, and it's filled with close companions who soon challenge the new guy.