Series / For the People 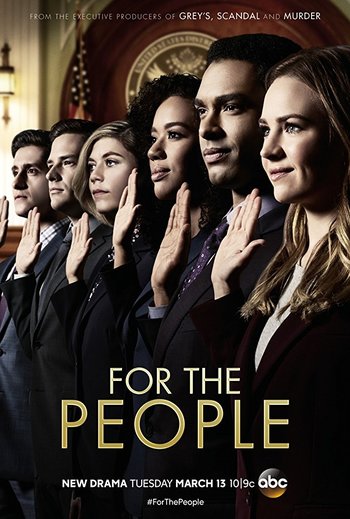 From right to left: Sandra Bell, Leonard Knox, Allison Adams, Kate Littlejohn, Seth Oliver, and Jay Simmons.
Jill (to Sandra): I'm giving this case to you because I think you can connect to her.
Roger (to Kate, separately): I'm giving this case you to because I know you will want to crush her.
Jill: Because you understand the rule breakers.
Roger: Because you believe in the rule of law.
Jill: Do your best.
Roger: Win.
— Episode 1x03, "18 Miles Outside of Roanoke"
Advertisement:

For The People is a 2018 legal drama which aired on ABC and produced by Shonda Rhimes.

Set in the Southern District of New York (SDNY) Federal Court, known as "The Mother Court," the series follows lawyers just beginning their careers as either Assistant United States Attorneys or Public Defenders. They handle the most high-profile and high-stakes cases in the country as their personal lives intersect and the deep-seated rivalries between the two sides of the court flare up. The prosecution, headed by Roger Gunn (Ben Shenkman), includes Leonard Knox (Regé-Jean Page), the ambitious son of a US Senator; Kate Littlejohn (Susannah Flood), an analytical but seemingly emotionless perfectionist; and Seth Oliver (Ben Rappaport), an awkward lawyer who used to work for a private firm before joining the mother court at the same time as his girlfriend Allison. The defence, headed by Jill Carlan (Hope Davis), includes Sandra Bell (Britt Robertson), a driven crusader for truth and justice who hates to lose; Allison Adams (Jasmin Savoy Brown), Sandra's best friend who joined the court at the same time as boyfriend Seth; and Jay Simmons (Wesam Keesh), a laid back and awkward young man supported by his family. Rounding out the cast are as Chief Judge Nicholas Byrne (Vondie Curtis-Hall) Ms. Tina Krissman (Anna Deavere Smith), the no-nonsense clerk of the court.

After two seasons which were both ten episodes long, the series was canceled.

Not to be confused with the equally short-lived 1965 series of the same name with William Shatner heading an ensemble cast including Howard da Silva and Jessica Walter.

Tropes found in For the People are: