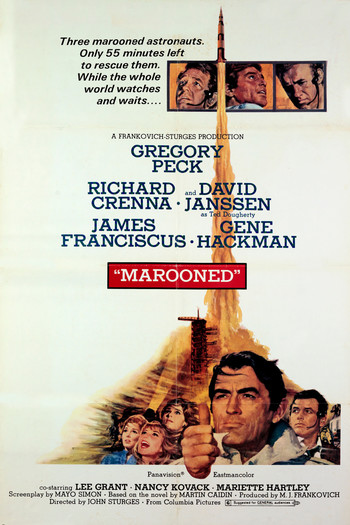 A 1969 sci-fi thriller film directed by John Sturges, adapted from the novel of the same name by Martin Caidin.

Three American astronauts (Gene Hackman, Richard Crenna, and James Franciscus) returning from a long space station mission suddenly face imminent death when their spacecraft malfunctions and they are stuck in orbit with a very limited oxygen supply. On the ground, Chief astronaut Ted Dougherty (David Janssen) breaks all the rules to implement a mission to rescue the seemingly doomed adventurers. Charles Keith (Gregory Peck) is the ground commander in Houston who must decide whether or not to approve the dangerous rescue mission.

For the trope related to characters being marooned, see Robinsonade.

For the Mystery Science Theater 3000 version (shown under the title Space Travelers), please go to the episode recap page. It's the only movie ever riffed on MST3k to have won an Oscar (for Best Special Effects), and possiblynote It's complicated - you have to factor in inflation, but also the fact that movie production costs have inflated faster than the standard rate. They also riffed some Russian, Finnish and Eastern European movies that had high local budgets, but converting to a dollar amount is tricky. the highest-budgeted one.