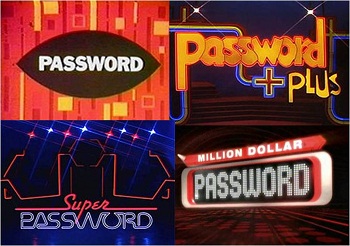 The show's (basic) history in one image.
From Hollywood, the word game of the stars, Password!
Advertisement:

Game Show created by Bob Stewart for Mark Goodson-Bill Todman Productions in 1961, after the company searched for parlor games that could be played for modest stakes in the wake of the quiz show scandals. Stewart suggested a game whose players asked themselves a simple question: "How well can I communicate with just one word?"

Password debuted in October 1961 on CBS as the first game to have celebrity guests as teammates for civilian contestants, which was a big freaking deal at the time. Allen Ludden left G.E. College Bowl note the show British stalwart University Challenge is based on to moderate Password (Robert Earle replaced him on the former), which ran until 1967 on CBS daytime and primetime. Frequent guests included the stars of Bewitched.

Ludden returned as host of ABC's 1971-75 revival, which went through two theme tunes and two sets. The changes were made for Password All-Stars (November 1974 to February 1975), after which members of the public were once again allowed to compete.

Two more daytime revivals appeared on NBC — Password Plus from 1979-82, and Super Password from 1984-89. Both used Password Puzzles, wherein each round consisted of five passwords that described another person, place, or thing; for instance, "Wiki", "Lampshade", "Hanging", "Topics", and "Egregious" might be used to describe TV Tropes. These versions also featured a Bonus Round ("Alphabetics" on Plus, "Super Password" on Super) where the celebrity had to describe ten passwords, beginning with consecutive letters of the alphabet, within 60 seconds for a bonus of at least $5,000.

In June 2008, CBS debuted Million-Dollar Password for a brief primetime run on Sunday evenings with Regis Philbin as host. CBS then ordered a second set of episodes, which began airing in January 2009. The show was canned after 12 episodes because, despite winning its timeslot more often than not, it wasn't drawing the demographics the network wanted.

Interestingly, the show returned as a segment on Late Night with Jimmy Fallon on January 18, 2011, hosted by Steve Higgins. The segment is, essentially, a simpler version of the later-era CBS style: the game now has words beginning at six points and no Lightning Round, and there's no stated prizes. Its first celebs were Fallon and Password stalwart Betty White. The game was also played during White's 90th Birthday: A Tribute to America's Golden Girl on NBC in January 2012; that edition was hosted by Joel McHale. An edition of Plus with Tom Bergeron hosting was a part of the 2015 Daytime Emmy Awards, to introduce Betty White's Lifetime Achievement Award.

In May 2016, news surfaced that ABC (which aired the 1971-75 edition) was interested in potentially reviving the series; this came on the heels of their summer lineup being populated by several game show reboots, including fellow Goodson-Todman properties To Tell the Truth, Match Game, the returning Celebrity Family Feud, and a reboot of Password's close cousin, The $100,000 Pyramid.

The ABC revival did not pan out, but in 2021, NBC ordered a revival produced by Jimmy Fallon and hosted by Keke Palmer, which premiered in August 2022. It is a modernized take on the original CBS version with some elements of Plus; namely, games are played as a best-of-three match, with the first two games played to 15 points, and a Password Puzzle as the third round if necessary. The first episode was dedicated to Betty White, who had died on December 31, 2021.

"Allen Ludden saying the Password for today is "TV Tropes". TV Tropes collects and expands on conventions and devices in creative works, such as Password, and we think it's a pretty nice place. Think about it. See you next time, I hope."