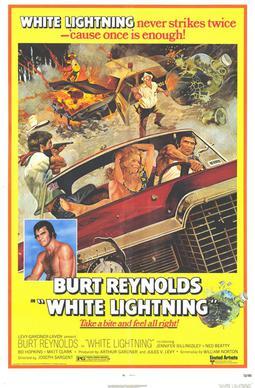 Before the Bandit.
Advertisement:

Bobby "Gator" McKlusky is serving time in an Arkansas prison for running moonshine when he learns his younger brother Donny was murdered and that Sheriff J.C. Connors was the one behind it. Gator knows the sheriff is taking money from local moonshiners, so he agrees to go undercover for a federal agency (presumably the IRS or BATF) to try to expose the sheriff. His handlers force him onto Dude Watson, a local stock car racer and low-level whiskey runner.

Watson has no choice but to cooperate because he himself is on federal probation or parole. To infiltrate the local moonshine industry, Gator lands a job running moonshine with Roy Boone. He also starts an affair with Boone's girlfriend, Lou. When the sheriff discovers Gator is working for the federal government, Connors sends his enforcer, Big Bear, after him. Gator decides to go after the sheriff, leading to an epic car chase finale.

It was followed by a 1976 sequel called Gator where McKlusky is once more forced to work against his fellow crooks by the government. Jerry Reed is notable Playing Against Type as the Big Bad "Bama" McCall.