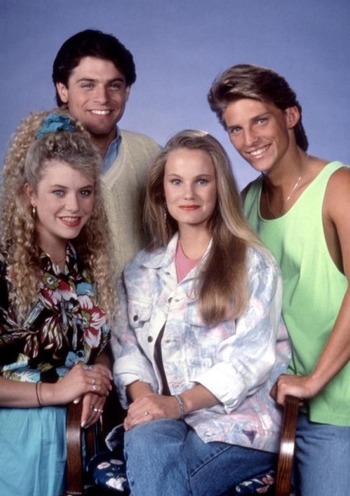 Short Version: That show you vaguely remember about the alien girl who could freeze time.

Long Version: Evie Garland (Maureen Flannigan), the main character, is half-alien, which gives her a variety of special powers, which get her in and out of trouble on this syndicated half-hour Sitcom which ran from 1987 to 1991. She lives with her human mother, Donna Garland (Donna Pescow), and only communicates with her Anterian alien father Troy via a crystal on her desk (voiced by Burt Reynolds).

All Anterians have a variety of powers, including the ability to "Gleep", or to will simple, non-mechanical objects into existence. As Evie is only half-Anterian, her powers are less refined than a full-blooded Anterian. Evie's main power is the ability to freeze and unfreeze time by placing her fingers or palms together, respectively. Later in the show, on her sixteenth birthday, she gets the ability to teleport.

Donna and Evie must keep her powers a secret from various nosy side-characters, which include the oblivious Mayor Kyle Applegate (Doug Mc Clure), the dim-witted Buzz Belmondo, and Evie's high school sweetheart Chris Fuller (Steve Burton). Donna's brother, Beano (Joe Alaskey), is also a frequently recurring guest, and the only other character to know Evie's secret.

During the first season, it initially aired as part of "Prime Time Begins at 7:30", a syndication package created by NBC in the fall of 1987, which consisted of five sitcoms that each aired once a week, and were produced and distributed by various production companies and distributors contracted by NBC. The package was aimed at attracting viewers to NBC stations in the half-hour preceding prime time (8:00 p.m. in the Eastern and Pacific Time Zone, 7:00 p.m. elsewhere), and was conceived as a result of the FCC's loosening of the Prime Time Access Rule, legislation passed in 1971 that required networks to turn over the 7:30 p.m. (Eastern) time slot to local stations to program local or syndicated content; and the relaxation of the Financial Interest and Syndication Rules, which had prevented networks from producing content from their own syndication units to fill the void. Unfortunately, however, the experiment was largely a failure, with every program being regularly pummeled in the ratings by Wheel of Fortune/Jeopardy!, talk shows, court shows, and news magazines. Out of this World was the only one of the package to last four seasons, airing mainly on weekends.

Out of this World contains examples of: