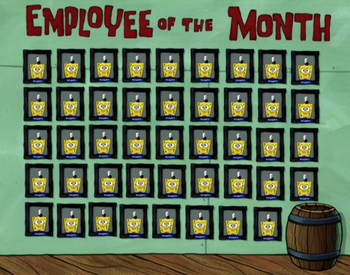 Less impressive considering his competition doesn't really care.
"I think Employee of the Month is a good example of being a winner and a loser at the same time."
—Demetri Martin
Advertisement:

Sometimes in media (but most often in a Work Com), companies may introduce an employee of the month award, designed to get people working more efficiently. Although this is usually just for bragging rights, occasionally something more rewarding, like a trip elsewhere or even a promotion, may be awarded as well. This is usually used in two ways:

The award may be used to provide An Aesop about competition and how it can ruin friendships, especially if it leads to an All for Nothing situation where none of the main characters win. It may also be seen as Serious Business. If it does ruin a friendship, but only temporarily, it can lead to a Feud Episode.

Conversely, it may Compliment Backfire and make the recipient demoralized to realize their biggest achievement in life is a minor award from a Soul-Crushing Desk Job or Soul-Sucking Retail Job. It may inspire them to Pursue the Dream Job, flip out and say "Take This Job and Shove It", or maybe just learn to accept Happiness In Minimum Wage.

This does not necessarily have to be an employee of the month award - it can also be given out as an Employee of the Week as well, for instance. As long as it's an award given out to make employees work at a better pace.

This is Truth in Television with the Employee of the Month award being an actual award given out by employers which recognizes employees for achieving excellence in their field, as well as those who were the best worker across all fields. The purpose of said award is to encourage the staff to work harder and more productively. It can also be put on an employee's resume to prove to a potential new employer how hard that worker has done in their previous company.

See also the Swear Jar, which can also be used to improve a person's behaviour.