Series / My Parents Are Aliens 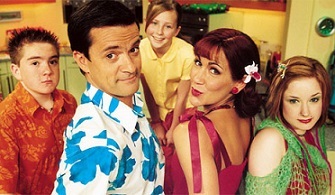 What could possibly go wrong?
Advertisement:

My Parents Are Aliens is a British children's sitcom which aired on ITV between 1999 and 2006. It told the story of Brian and Sophie Johnson, a couple of Shapeshifting Valuxians stranded on Earth, and their adopted children, Mel, Josh and Lucy, with new children being adopted into the family in later seasons. For the final season, the set and most of the cast were completely changed.

While stranded, Brian and Sophie attempt to study Earth culture, in order to fit in and thus avoid being found out and taken away for scientific experimentation. A typical episode would begin with Brian and Sophie learning about some aspect of Earth culture and misunderstanding it completely, resulting in various wacky hijinks. Often, they would attempt to help the children out with their schoolwork and social lives, inadvertently making things far more complicated than they were in the first place and resulting in some painfully farcical plots.

The show's self-referential humour and frequent Parental Bonuses attracted a cult following above the target age group. Sadly, few episodes were ever released on VHS, and the closing of ITV's in-house production of children's shows means that the show ended abruptly after the eighth series. The show continues to be repeated on ITV's children's channel, CITV.

My Parents Are Aliens provides examples of: