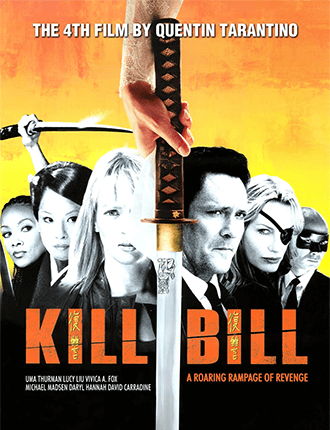 "Looked dead, didn't I? But I wasn't. And it wasn't for lack of trying, I can tell you that. Actually, Bill's last bullet put me in a coma. A coma I was to lie in for four years. When I woke up, I went on what the movie advertisements referred to as a Roaring Rampage of Revenge. I roared. I rampaged. And I got bloody satisfaction. I've killed a hell of a lot of people to get to this point, but I have only one more. The last one. The one I'm driving to right now. The only one left. And when I arrive at my destination... I am gonna KILL BILL."
— The Bride
Advertisement:

Conceived by Tarantino as one complete movie, Miramax split it into two parts (Vol. 1, released in 2003, and Vol. 2, released six months later in 2004) due to its length. Watching them together earns you a nice four-hour action romp filled with deliberately over-the-top violence which runs on the Rule of Cool. This original cut of the film was eventually released as Kill Bill: The Whole Bloody Affair, with select sequences being extended or uncensored.

The story — told in "chapters", as well as Tarantino's signature non-linear fashion — centers around an Action Girl known primarily as "The Bride", a retired assassin who wants a normal life. Her former crew, The Deadly Viper Assassination Squad (DiVAS for short), isn't too happy with that — and during The Bride's wedding rehearsal, they crash the church and slaughter the entire wedding party, then beat The Bride spaghetti-western-style until she can't move. Once the DiVAS are done, their leader Bill walks up to The Bride and puts a bullet in her head — right after The Bride tells him she's pregnant with his child. Four years later, The Bride wakes up from a coma and vows to get her revenge on the DiVAS — and anyone who happens to get in her way — while saving Bill for last.

Tarantino has toyed with ideas for a sequel

, but as of 2022 it seems to be off the table. However, actors have expressed interest in the idea of daughters of the victims taking revenge for their mothers, especially Nikki.

To view a partial list of the many references to other films in Kill Bill, visit here.

This Roaring Rampage of Tropes includes examples of the following:

Go home to your mother!

The Bride does this to the last, frightened, teenage member of the Crazy 88s gang, with the flat of her blade against his backside.

Go home to your mother!

The Bride does this to the last, frightened, teenage member of the Crazy 88s gang, with the flat of her blade against his backside.