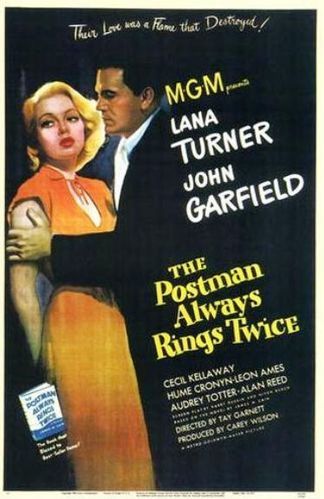 The Postman Always Rings Twice is the third and best-known screen adaptation of the eponymous novel, directed by Tay Garnett and released in 1946 (it was first adapted by French director Pierre Chenal in 1939 as The Last Turning with Fernand Gravey and Michel Simon, and then by Italian director Luchino Visconti in 1943 as Ossessione with Clara Calamai and Massimo Girotti). It is considered one of the key entries in the Film Noir genre.

Frank Chambers (John Garfield) drifts into a dusty rural California town, in search of a good meal. At the diner, he finds a meal, a job, and a beautiful woman named Cora Smith (Lana Turner). Within a small bit of time, Frank and Cora have a passionate affair. But Cora is married already, to a man she doesn't love. She wants to start over and live a new life with Frank, but not lose the diner. They see the murder of Cora's husband Nick (Cecil Kellaway) as a perfect solution. But how will they deal with the consequences of their actions, and will they get caught?