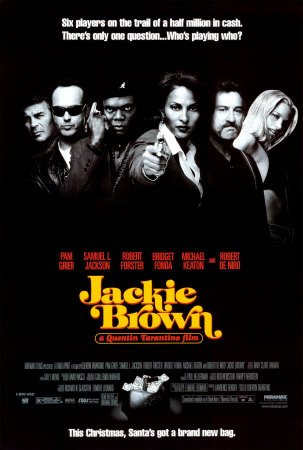 "AK-47: the very best there is. When you absolutely, positively got to kill every motherfucker in the room, accept no substitutes."
— Ordell Robbie
Advertisement:

When the authorities discover Jackie's smuggling, they put together a sting operation where Jackie will implicate Ordell in the money smuggling so the ATF can take him down. The ATF promises to clear Jackie of the outstanding charges against her, but she only goes free if the plan goes off without a hitch. When Jackie finds out Ordell plans on smuggling in more money than normal, she keeps the information from the ATF and works out a plan of her own to keep all the money for herself while gaining her freedom. With Max's help, Jackie could pull it off, but she must outsmart the cops, Louis, and Ordell…

As a film, it is somewhat different that the usual Tarantino fare, being probably the closest he will ever get to "real life". Ordell is much closer to life (relatively) in its portrayal of a charismatic yet paranoid thug and Jackie's plan and romance with Max Cherry are full of subtleties and meaningful conversations about getting old and beginning again in a harsh life. Its climax is also much less bombastic than most, but don't take that as meaning it is less bloody.

The novel Rum Punch by Elmore Leonard served as the basis for this film's story, which probably explains why it is the least Tarantino-esqe of Tarantino's films.

Oh, and Steven Soderbergh's Out of Sight (also based on an Elmore Leonard novel) seems to share a universe with this film — as Soderbergh brought in Michael Keaton to reprise his role as Ray Nicolette.