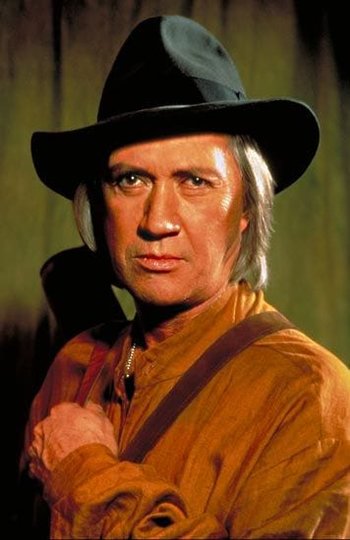 "Most actors spend a lot of time training themselves to be an actor. And I kind of didn't do that. I just started doin' it in front of an audience and had to deliver."
Advertisement:

David Carradine (born John Arthur Carradine; December 8, 1936 – June 3, 2009) was an actor and musician best known for his many martial artist and Yellowface roles. He was the son of John Carradine and half-brother of Keith Carradine and Robert Carradine.

In 1960, he served in the US Army for two years, though at one point, he was court-martialed for shoplifting. Afterwards he became an actor. Interestingly, during production of perhaps his most famous role, Kung Fu (1972), he did not actually know martial arts and made do with his dancing, sword fighting, boxing, and street fighting skills. Afterwards, he studied martial arts for real and while he never considered himself a master, he became skilled enough to teach it. In 2005, he visited the Shaolin Monastery and the abbot, Shi Yǒngxìn, thanked him for helping to promote the Shaolin and kung fu culture, which he replied, "I am happy to serve."

He sang and played several instruments like the piano, guitar, and flute. He often contributed to the soundtracks of movies or shows he was part of. He and his brother Robert were in a band called Cosmic Rescue Team aka Soul Dogs.

He was married and divorced several times, had a high profile romance with the actress Barbara Hershey, and had three children and four stepchildren. He also had an extensive criminal record. At several points in his life, he had been arrested for various offenses.

He passed away at age 72. His cause of death was ruled that he accidentally suffocated himself while attempting Auto-Erotic Asphyxiation. His final roles were released posthumously. His tombstone calls him "The Barefoot Legend" and has the first line of his song "Paint", "I'm lookin' for a place where the dogs don't bite, and children don't cry and everything goes just right, and brothers don't fight..."