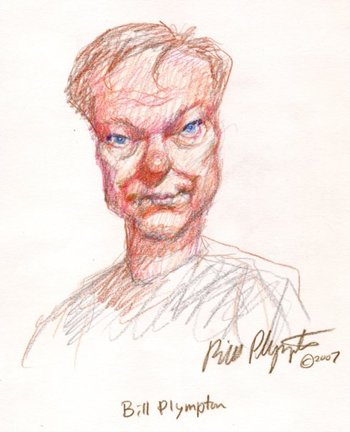 Pictured: the artist. Also one of his more normal drawings.
"The thing I love about Bill's stuff is that I know it'd make Bart Simpson laugh his ass off."
— Matt Groening
Advertisement:

Bill Plympton is an Acadamy Award-nominated animator and director whose work is known for being...somewhat unique. His films and shorts have featured everything from outlandish 1950s-style monsters to musicals about sexual fantasies to the truth about Santa's fascist past.

His animated films are:

His live-action features are:

He also did the videos for Weird Al's songs "Don't Download This Song" and "TMZ", and there is currently a documentary being made about him.

In addition, he has provided Couch Gag sequences for six episodes of The Simpsons to date, and made animated sequences for the Season 19 DVD menus.

All of his work up to 2019 is currently owned by Shout! Factory.