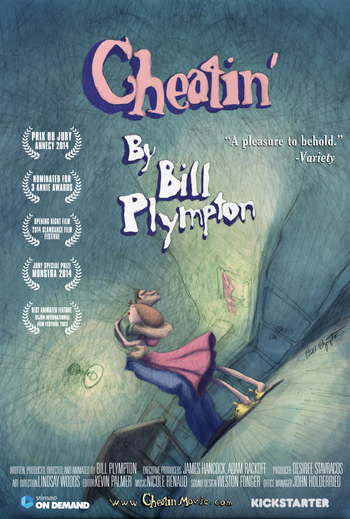 The story of a woman who seeks revenge on her husband by becoming his mistress.
Advertisement:

By The New '10s, Bill Plympton was a living legend among animators, having made a nearly 40 year career as an independent film makers with legions of fans and heaps of critical praise for his unique and bizarre cartoons. However, he had grown frustrated with less sympathetic critics, who felt that he was only capable of producing Animated Shock Comedies that relied on over-the-top sex and violence and posessed little to no emotional substance. With his 10th feature film, he sought to prove them wrong.

Cheatin' tells the story of Ella, who falls madly in love with the handsome and muscular Jake after he saves her from a perilous bumper car incident. The two are soon married and begin a blissful life together. Shortly thereafter, Jake is approached by numerous women at his job as a gas station attendant, but he remains steadfastly loyal to his betrothed... that is, until one of the many would-be mistresses blackmails Ella and tricks Jake into believing she's unfaithful to him, sending him into a suicidal depression before he starts seeing multiple women behind Ella's back. Meanwhile, Ella begins to notice that she and Jake are beginning to drift apart and can't figure out why. When she discovers his sexcapades, she sends a hit man after him, before meeting a magician named El Merto with a machine that will temporarily transport her consciousness into the bodies of the many, many women with whom Jake is sleeping.