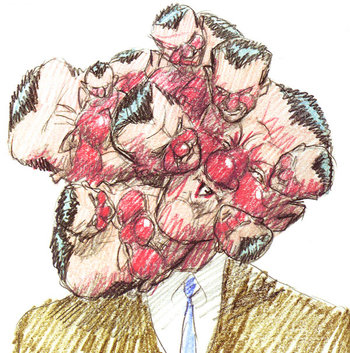 A little Clearasil will fix that.
Advertisement:

Your Face is a short (three minutes!) animated film from 1987, created by the patron saint of Deranged Animation, Bill Plympton.

The entirety of the short (until the last few seconds, that is) is a static shot of a man's face. As a dreamily romantic song plays, the man's face changes and morphs in many bizarre and surreal ways.

The song was written and performed by Maureen McElheron, Plympton's longtime musical collaborator. Her recording was then slowed down to sound male. It was later released as a bonus track for the soundtrack to their feature film collaboration, The Tune.

Plympton would create a Shot for Shot Remake of the short as a Couch Gag for The Simpsons season 29 episode, "3 Scenes Plus a Tag from a Marriage."