Film / The Appointments of Dennis Jennings 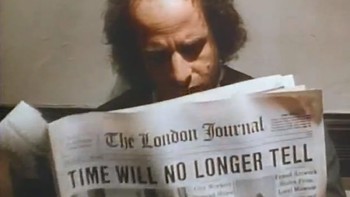 The Appointments of Dennis Jennings is a 1988 short film starring Steven Wright and Rowan Atkinson.

Dennis Jennings (Wright) is a waiter in New York City. Dennis suffers from various mental tics and obsessions and anxieties, including paranoia, which lead him to his appointments with his therapist, Dr. Schooner (Atkinson). Dr. Schooner could not be less interested in his patient, doodling grocery lists while Dennis drones on and on and on. Eventually he grows to actively dislike Dennis. Meanwhile, Dennis's girlfriend Emma (Laurie Metcalf) also seems to be utterly disinterested in him, leaving a romantic dinner early. When Dennis discovers a connection between Dr. Schooner and Emma, he snaps.