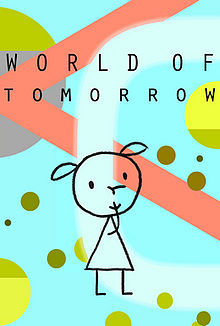 What a happy day it is!
"Do not lose time on daily trivialities. Do not dwell on petty detail. For all of these things melt away and drift apart within the obscure traffic of time. Live well and live broadly. You are alive and living now. Now is the envy of all of the dead."
— Emily Clone
Advertisement:

World of Tomorrow is a short sci-fi 2015 film by Don Hertzfeldt, and is the first of his works to be animated digitally. The story is told using a simplistic line-drawing style and is about a little girl who is contacted by her clone in the distant future. What follows is a strange mix of a young girl's blind enthusiasm and an ancient clone's robotic descriptions of the very doomed future.

The film has received many accolades for its simple, yet deep and heartfelt presentation.

Tropes that apply to World Of Tomorrow: