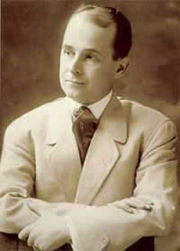 "I hope and dream the time will come when serious artists will make marvelous pictures that will love and live in life-like manner and be far more interesting and wonderful than pictures you now see on canvas. I think if Michelangelo was alive today he would immediately see the wonders... The artist can make his scenes and characters live instead of stand still on canvas in art museums."
— Winsor McCay (talking during a WNAC Radio Broadcast, New York, September 1927)
Advertisement:

Zenas Winsor McCay (circa 1866–71 – July 26, 1934) was an American cartoonist, writer, and animation pioneer. McCay's art style is immediately recognizable by its incredible detail and awesome perspective. Check the other wiki's media page

His most famous comic, Little Nemo, is a surreal adventure through the bizarre world Nemo visits when he falls asleep. Other works include Dream of the Rarebit Fiend, an entire strip about people suffering Acid Reflux Nightmares, which inspired perhaps the first Live-Action Adaptation ever, in Edwin S. Porter's 1906 film Dream of a Rarebit Fiend.

McCay was also one of the first animators, the self-described "originator and inventor of animated cartoons". His first "attempt at drawing pictures that will move" was a two-minute Little Nemo skit in 1910; he drew over a thousand stills by himself, by hand. His most famous cartoon is probably Gertie the Dinosaur, an animated short from 1914 that set the bar for future animators. Gertie was also the first film to ever use the Roger Rabbit Effect.note Or at least a variation thereof. He didn't insert the drawings into live-action photographs. He interacted with the film on a Vaudeville stage, bringing with him a bullwhip and instructing Gertie to wave, look at him and eat an apple that he would pretend to throw at her, among other things.

McCay was the first to treat animation as a serious, dramatic art form, producing a detailed documentary rendition of The Sinking of the Lusitania in 1918. It contained over 25,000 realistic drawings, again all done personally by hand, taking nearly two years to complete. This also counts as the first Wartime Cartoon, as it explicitly served as a piece of propaganda in favor of the U.S. entering World War One. At the time it was the longest piece of animation ever made. Historians say it took until the 1930s for other animation studios to catch up with the level of technical skill McCay demonstrated.