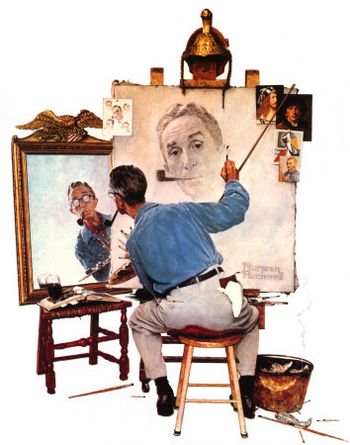 Triple Self Portrait, 1960
"Right from the beginning, I always strived to capture everything I saw as completely as possible."
Advertisement:

Rockwell began his artistic career with Boys' Life, the magazine of the Boy Scouts of America, and he would continue to illustrate for them well into his eighties. He also did cover art for a number of other magazines, most notably for The Saturday Evening Post from 1916 to 1963, after which he provided illustrations for Look until that magazine closed in 1971.

Rockwell was a prolific artist, producing thousands of works in his lifetime. His artwork, which typically involved gently humorous or sentimental depictions of childhood or idyllic American life, has frequently been homaged and/or parodied in popular culture, to the point of Stock Parody.

Norman Rockwell works with their own pages:

Tropes associated with Rockwell and his paintings: