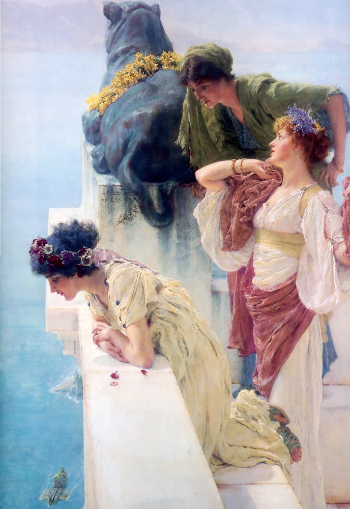 A Coign of Vantage (1895)
"As the Sun colours flowers, so art colours life."
Advertisement:

Born Laurens Tadema in the Frisian village of Dronrijp, his creative skills were nourished in his youth by an artistic mother, who raised Laurens and his four siblings after the death of their father. After surviving tuberculosis at fifteen, he decided to pursue a career in art, and began attending the Royal Academy of Antwerp in 1852. In the final year of his schooling, he became assistant to Professor Lodewijk Jan de Taeye, who fostered his interest in history and historical costume.

Alma-Tadema's earliest work focused on the early medieval Franks, though he eventually branched out into Egyptian themes, which had more widespread appeal. It was a visit to Italy in 1863, however, that sparked an interest in ancient Rome and Greece, the subjects for which he is best-known.

Following the outbreak of the Franco-Prussian war in 1870, Alma-Tadema relocated to England with his young daughters, Laurence and Anna, and his sister Artje. The move was also motivated by his affections for fellow painter Laura Thesesa Epps, whom he had met after the death of his first wife; they married a year later. In London Alma-Tadema's career reached new heights as his style evolved, largely under the influence of the Pre-Raphaelites.

Alma-Tadema is notable for his painstaking dedication to historical accuracy, encouraged by his mentor de Taeye. Behind the romantic scenes of "Victorians in togas" was a real passion for historical subjects. He was not merely interested in the aesthetics of the past, but took a vested interest in archaeology and historical research. Over the course of his lifetime he made several excursions to ancient sites, including excavations at Pompeii.

Although financially successful and renowned in his time, Alma-Tadema's work fell into disdain after his death, his art dismissed as the pinnacle of stuffy and soulless Victorian academicism. Nevertheless, his vision of the ancient world would influence artists decades after his death. His mark can perhaps best be seen in Hollywood, where his work inspired the art of films such as Gladiator and The Ten Commandments.