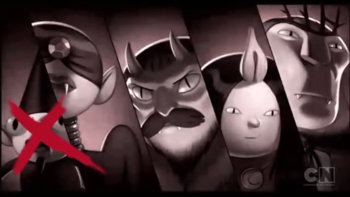 The stakes have been raised — to drive one through each of their hearts.
Advertisement:

This is a trope that occurs when instead of heroes being taken down one by one, this happens to a previously established party of central or secondary villains.

For this trope to be in play, the party of villains must be previously established at the start of an arc or even at the start of the story, and the plot must follow the heroes taking them down one by one (or in groups), either by hunting them down, finding them while looking for something else, finding them at random or being hunted down by them. Often, the existence of a party and their number is made clear, but each antagonist is introduced separately as a character, though in rare occasions, all villains will be introduced simultaneously and afterwards fought one at time. There are times where the existence of a group is mentioned, but neither is their number or the characters belonging to it.

This trope is particularly popular in Shōnen manga for providing a simple and easy to follow structure for an arc and introducing characters for plenty of potential fights that can give all of your main characters some time in the limelight.

This trope can be used in order to set the pace and goal for a Story Arc or Myth Arc. If the heroes have a group of six villains to defeat, the writer can set each villain fight separately, letting multiple character get focus, and also letting the reader have a ballpark of how far along in the arc the heroes are. Though there turning out to be a secret extra villain to be defeated or more villains being added on the fly is not an uncommon occurrence, especially if the Big Bad is not a part of the group, but rather their boss.

This trope doesn't necessarily demands the villains to be killed, they just have to be neutralized as a threat, be it by killing them, sealing them away, arresting them or simply putting them out of commission for the duration of the story. Some stories with non-villainous antagonists can have them simply be defeated in order to proceed.

Sub-Trope of Dwindling Party. Often crosses with Quirky Mini Boss Squad. Can be used in overlay with The Rest Shall Pass, if that trope is used multiple times in a single Story Arc. This could lead to an instance of a Villain No Longer Idle as the Big Bad is forced to take action due to his minions being dealt with. Contrast with Mook Horror Show, this trope doesn't focus on Mooks, but an established party of particularly strong and relevant antagonistic characters, taken out in a specific systematic method. Compare Gotta Kill Them All and Roaring Rampage of Revenge.