Shooting Lessons From Your Parents 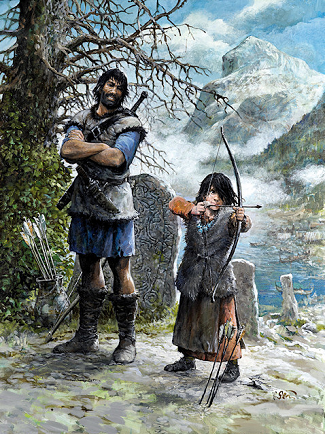 Marshall: How long have you been doing this?
Robin: My dad taught me how to shoot when I was a kid. Whenever I'm feeling lonely or depressed I just come here and it reminds me that...guns are fun.
— How I Met Your Mother, "Where Were We?"
Advertisement:

In Real Life, marksmanship and other martial skills are typically learned as an adult through dedicated training, like from the military or police. That doesn't have to be the case in fiction. If a character proves to be have Improbable Aiming Skills, their companions will assume that they gained these abilities through rigorous military discipline. Later in a flashback, however, it's shown that their skills were, in fact, simply a result of Dad taking them hunting as a child!

In a fictional environment where shooting is a useful skill, it is natural for a family member (nearly always a father or grandfather) to pass on their skills as a rite of passage to their child (almost always a son or grandson), who will then hone these abilities to a military-grade degree by the time they reach adulthood. This trope is widespread in The Western and settings with Proud Warrior Race Guys, but understandably less common in works set in modern, urban societies, where the ability to use a firearm is not a necessary part of day to day life.

May be used to humanize a Cold Sniper, and is commonly part of the backstory of any Southern Fried Privates.