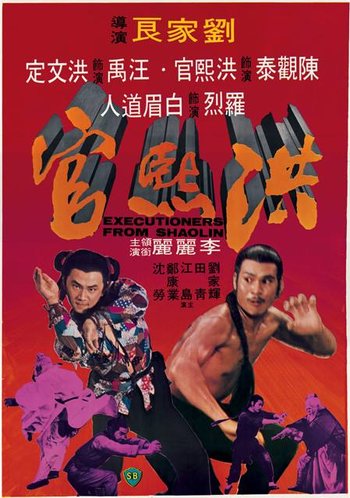 Yeah, the hero is all dressed in girly clothes, and he's a dude. Because why not?

"Having learned that the revolutionaries were using Shaolin Temple as an undercover, the Manchurian Count ordered Priest Pai Mei and his top disciple Kao Tsin Chung, Governor of Kwangtung and Kwangsi, to raid the shaolin Temple. They surrounded the Temple and set fire to it. In an attempt to rescue his disciples, Priest Chi Shan enter into a crucial duel with Priest Pai Mei."
The film's opening Info Dump

Executioners from Shaolin is a 1977 Shaw Brothers Martial Arts Movie directed by Lau Kar-Leung, starring Wong Yue (not to be confused with Jimmy Wang Yu), Chen Kuan-tai, Lo Lieh, Gordon Liu and Lily Li. It is notable for being the first Shaolin-themed filmed NOT directed by Chang Cheh, released in the wake of Chang's earlier Shaolin epic, The Shaolin Temple (1976) from the previous year, and also the first time Lo Lieh gets to portray Master Pai Mei, the infamous Shaolin traitor, a role which he will re-visit in Abbot of Shaolin and Fists of the White Lotus years later.

A good old-fashioned tale of Revenge in the world of kung-fu, set in the aftermath of the Shaolin Temple's destruction: The traitor Pai Mei has allied with the Manchurians to eliminate all resistance from the Shaolin sect, and is on a killing spree to eliminate every Shaolin practitioner in the country. Hung Hsi-kuan, one of the survivors, vows to take revenge on Pai Mei, and spends years training his tiger-style kung fu to defeat him. Along the way, he falls in love with the crane-style practitioner Fang Yung Chun, and they have a son together, Hung Wen-ding. But when Hsi-kuan is unable to overcome Pai Mei, it falls to the young Wen-ding to avenge his father and finally restore glory to the Shaolin clans.

A favourite film of the Wu-Tang Clan, who sampled a line from this movie ("Tiger style!") at the beginning of their classic track "Wu-Tang Clan Ain't Nuthing ta F' Wit".

Executioners of Shaolin contains examples of: